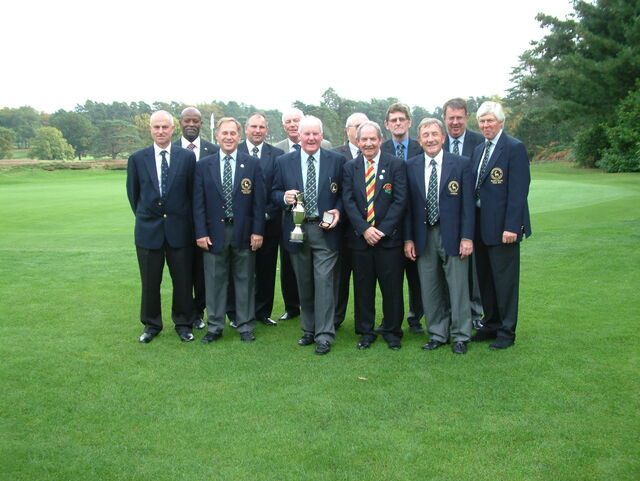 The victorious Hertfordshire team of John Ambridge, David Dannhauser, Tyrone Carter, Nick O’Byrne, Douglas Cameron,
Colin Hardman, Mike Ready, Gaius Potton, Martin McKenna and Ben Brown after winning the Seniors League Final for the
third successive year. The fixture was under threat at one stage from the weather after several days of heavy rain but
was completed thanks to the sterling work of the West Hill Green Staff and the heavy rain that was forecast, thankfully
passing by. The match was played in great spirit with the result in doubt up to the final shot of the final game on the
final green. A tie was on the cards until a remarkable chip in on the last helped Hertfordshire to a 5 1/2 to 4 4/2
victory over Kent. A remarkable game played by two excellent teams. Pictured to the right of the Team Captain Gaius
Potton (holding the trophy), is the President of the South Eastern Group,David Parrett and Hertfordshire President, Alan Green.